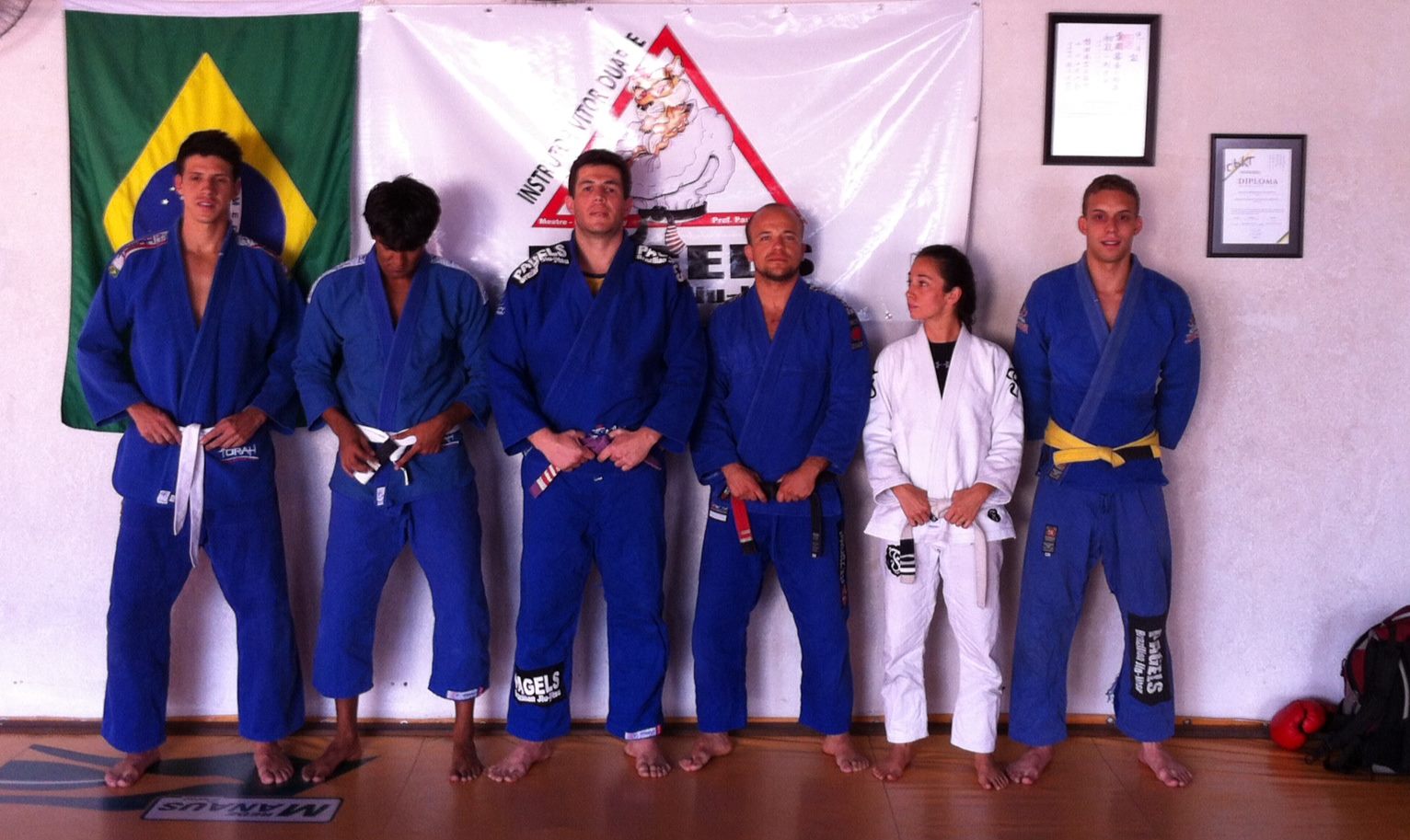 Rio is a city in black and white, hemmed in by mountains that loom down tall, narrow alleys. Copacabana bursts into technicolor as buildings give way to beach. The people move, like a parade, on a sidewalk parallel the shore, their conversations muted to me, save for single words, out of context, as if printed in talk bubbles over their heads.

Like a toddler, I’m reduced to a handful of nouns, a couple of selfish verbs, and lots of pointing and smiling. It feels as though I left my personality at home on my bedside table; I’m a one-way radio, set only to receive, unable to transmit.

Manny and I go to train Jiu-Jitsu with his Professor. There is no bathroom. There is no glass in the window. In place of a water fountain are a few old Coke bottles filled with water. There is a support beam, like an axis, in the middle of the mat. Everyone looks at me without expecting me to speak. Being American feels like a heavy coat around my shoulders, like something heavy that I can’t put down.

But the mat is a touchstone that measures against an entirely different set of qualities. I put on my gi, and just like that, I belong. I have to concentrate hard to get the techniques because I can’t ask questions or understand the verbal cues. This concentration creates a vacuum that sucks out all other thoughts and feelings. I am not nervous or self-conscious, I am not anything. I am just present. This feeling of presence is what we all as humans reflexively chase.

I was a white belt when we went to Brazil, naive and newly in love—both with jiu-jitsu and my Brazilian boyfriend. Everyone talks about training in Brazil as if it is this Homeric journey fraught with violence of mythic proportion, and maybe I was protected by my gender, my rank, and Manny (who gave every one of my sparring partners a speech in Portuguese about my bad neck), but all of my experiences there were positive. Here in America practicing jiu-jitsu banishes you to the fringe. I have to speak almost apologetically to my non-BJJ friends about my time on the mats, as though I’m copping to some deviant enterprise. In Brazil, it is, of course, part of the mainstream. As ubiquitous as going to yoga class is here. Although, unlike American yoga class, BJJ is authentically part of Brazilian culture. That is probably why it feels so magical to train there. I can’t wait to go back.

Pro Tip: Pack toilet paper in your gi bag. We trained at probably 6 gyms and none had toilet paper.

Being American feels like a heavy coat around my shoulders, like something heavy that I can’t put down.